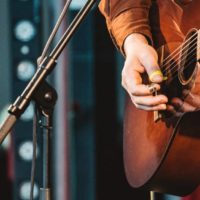 The Turnpike Troubadours reunited late last year after a two-year hiatus. Back in November, the band announced a now sold-out show at Colorado’s Red Rocks Amphitheatre on May 14; and now the group has announced additional 2022 tour dates.

Turnpike Troubadour will play two shows at Cain’s Ballroom in Tulsa, Okla. on April 8 and April 9, two shows at Billy Bob’s in Fort Worth, Texas on April 22 and April 23 and a show at John T. Floore’s Country store in Helotes, Texas. Tickets for the Tulsa, Fort Worth and Helotes shows go on sale on Jan. 14.  You can find more information on ticketing via Turnpike Troubadours’ official website.

Turnpike Troubadours released their breakout album Diamonds & Gasoline in 2010, followed by Goodbye Normal Street. Their self-titled 2015 album featured “The Mercury” and “The Bird Hunters” and in 2017, the band released the critically-acclaimed album A Long Way From Your Heart.  During the band’s hiatus, Turnpike members created projects of their own. Fiddler Kyle Nix released Lightning on the Mountain & Other Short Stories, and bass player R.C. Edwards’ band, RC and the Ambers, released Big Country.