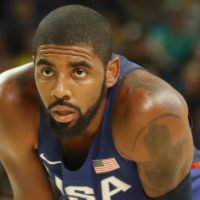 Brooklyn Nets’ guards Kyrie Irving and James Harden will miss the pivotal Game 5 matchup against the Milwaukee Bucks tonight.  Irving was ruled out of the game at Barclays Center after an MRI confirmed that he suffered a right ankle sprain in Sunday’s Game 4. Harden, who strained his hamstring in Game 1 of the second-round series, also remains out.

The 29-year-old Irving sustained his ankle injury halfway through the second quarter of Sunday’s game when he landed awkwardly on Bucks star Giannis Antetokounmpo’s foot, and remained on the floor for several minutes as Nash and team trainers attended to him.  Harden, who has been out since June 5, has done some on-court work since his injury, but he still needed to complete multiple high intensity workouts without any setbacks before being cleared to compete.